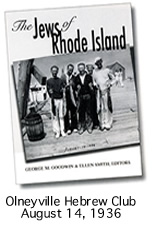 The Jews of Rhode Island was published in 2004 to commemorate the 50th anniversary of The Notes and the 350th anniversary of the American Jewish Community. With introductions and additional comments from George Goodwin, Ellen Smith, and Jonathan Sarna, it contains a selection of some of the more informative articles that have been published in The Notes over the past 50 years. To read the complete digitized version of The Jews of Rhode Island, click here.

In addition to The Jews of Rhode Island, the RIJHA also participated in the Images of America series, and our resident historians, Geraldine S. Foster, Eleanor F. Horvitz, and Judith Weiss Cohen, put together a marvelous photograph collection in a publication titled Jews of Rhode Island 1658-1958. We have also digitized this volume for your viewing pleasure. It is available here.